Posted at 15:05h in Uncategorized by Rhonda McNeill

Hill Country Family Services (HCFS) is an agency that has quietly served Kendall County families since 1985. Their mission is to help fami[1]lies in crisis meet their immediate needs, whether that be food, cloth[1]ing, or emergency financial assis[1]tance. Of the families assisted by HCFS, 80% live in the city limits of Boerne. The idea is to help them bridge the crisis at hand and to help get families back on their feet, as Staci Almager, the CEO, stated. A passionate advocate for HCFS, Staci has lived in the community for 13 years but has only been with HCFS in her current role for two. She explained that she began her involve[1]ment as a volunteer looking to give back to the community. She was then hired to lead the organization. Articulate and easy to talk to, Sta[1]ci is committed to bringing together all of the agencies serving the public, whether government, faith based or secular. Her goals include examining each local agency’s mission to ensure there are no more gaps but also that there is not duplication of services. Staci said that between COVID and the snowpocolypse, the need for communication and problem solving among the various helping agencies has never been more evident. As the storm in February drew ever closer, Staci reached out to the Chamber of Commerce and First Baptist Church. Between the three organizations, showers, meals and warming sta[1]tions were prepared and offered to the public during the extended power outage. Staci envisions HCFS as providing a “triage of good,” explaining “we help families ‘figure stuff out’ when a tragedy or crisis occurs.” Long-term collaborative planning among Kendall County and Boerne agencies has led to a “committee of five” to create a ten year vision to provide services so that families are taken care of in their own community. She explained that currently when a family experiences a crisis, often services are not local, creating addi[1]tional strain on the family both finan[1]cially and emotionally. The long term goal is to bring all needed services into Boerne so that does not happen. The services provided by HCFS are funded partly by their thrift store; 100% of the money earned there goes to support the mission, and totals 25% of the agency’s annual budget. Staci explained the agency’s latest fundraiser, titled Comedy for a Cause, will help provide needed funds. She said that comedian Gary Delana is a personal friend of hers, and agreed to provide the entertainment for the event scheduled for Oct. 2. More than just a fundraiser, though, Staci is hoping the event will be a chance for the community to “experience joy again” after a tough 18 months. 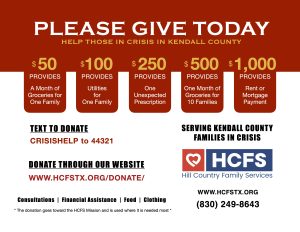